Super Lawyers is a rating service of outstanding lawyers from more than 70 practice areas who have attained a high-degree of peer recognition and professional achievement. The selection process is multi-phased and includes independent research, peer nominations and peer evaluations.
> superlawyers.com

Peer Review Ratings attest to a lawyer's legal ability and professional ethics, and reflect the confidential opinions of members of the Bar and Judiciary.

AV® Preeminent™ (4.5-5.0) - An AV® certification mark is a significant rating accomplishment - a testament to the fact that a lawyer's peers rank him or her at the highest level of professional excellence.
> martindale.com

You are here: Home » Legal Advice » So Cute, So Hard on a Marriage

So Cute, So Hard on a Marriage

After Baby, Men and Women Are Unhappy in Different Ways; Pushing PreEmptive Steps 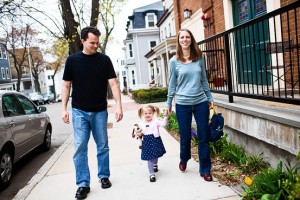 Along with shopping for sippy cups and strollers, expectant parents may want to consider another task for their to-do list: honing their marriage skills.

Numerous studies have shown that a couples’ satisfaction with their marriage takes a nose dive after the first child is born. Sleepless nights and fights over whose turn it is to change diapers can leach the fun out of a relationship.

Now, a growing number of mental-health professionals are advising couples to undergo pre-baby counseling to hash out marital minefields such as divvying up baby-related responsibilities, money issues and expectations for sex and social lives. A growing number of hospitals, midwives and doulas (birth coaches who provide physical and emotional support) are teaching relationship skills alongside childbirth education classes.

About two-thirds of couples see the quality of their relationship drop within three years of the birth of a child, according to data from the Relationship Research Institute in Seattle, a nonprofit organization focused on strengthening families. Conflict increases and, with little time for adult conversation and sex, emotional distance can develop.

Men and women experience the deterioration differently: Mothers’ satisfaction in their marriages plummets immediately; for men, the slide is delayed a few months. Hormonal changes, the physical demands of childbirth and nursing, and an abrupt shift from the working world to being at home with an infant may explain that, says Renay Bradley, the director of research and programming at the Relationship Research Institute.

A key source of conflict among new parents is dividing up—and keeping score of—who does what for the baby and the household. Counselors at Urban Balance have expectant couples make a list of every potential task—from paying bills and cooking dinner to getting up with the baby at 3 a.m.—and decide who is going to be responsible for each one.

“We felt better prepared,” says Mary Gould Moorhead, a 34-year-old teacher from Chicago and mother of an 8-month-old son who took the Urban Balance course with her husband last year. “I don’t think either one of us knew how much work [the baby] was going to be.”

“People spend more time decorating the nursery than preparing the relationship for the arrival of a baby,” says Joyce Marter, co-owner of Urban Balance LLC, a five-center psychotherapy practice in the Chicago area that has about 50 to 75 couples going through its $500, six-session “pre & post baby couples counseling” program each year. 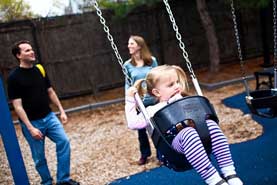 Another program, a 12-hour Bringing Baby Home workshop for expectant and new parents, developed by the Relationship Research Institute, teaches “four steps of constructive problem solving.” They include the “softened start-up,” a way of bringing up a problem without criticizing. For example, using “I” statements, and saying things like “I would appreciate it if…”
Richard Goodrow and Corrie Fisher found that the best way for them to resolve disagreements after their daughter was born 2½ years ago was by taking long walks. Sitting and talking face to face—where an eye roll or twinge of pain could derail the discussion—was tough. So every week they’d put their daughter in the stroller and discuss things from how frequently to clean their apartment to Ms. Fisher’s dream of going to graduate school.

“If it was skipped, it was surely missed. Tensions would rise,” says Ms. Fisher, now a 38-year-old graduate student in Boston. “It is how we process things,” says Mr. Goodrow, a 34-year-old IT consultant and sign-language interpreter. “Corrie and I talk about how if we buy a car, our relationship is over.”

The couple also has a weekly meeting to synch their calendars. It helps avoid miscommunication, and the resulting arguments, about, for example, who needs to work late—and who needs to be home and watch the baby.

Well-meaning friends and mommy blogs may offer up the cliché antidotes of date nights and sex. While those certainly can’t hurt, enhancing the friendship in the relationship is crucial, experts say.

For Tina Cornell and her husband, Chris Sorensen, scheduled date nights were actually stressful. “There’s all this pressure to have a meaningful conversation and quality time in a limited time frame,” says Ms. Cornell, a freelance jewelry designer and mother of two children, ages 5 and 22 months, in Chesterfield, Mass. Ms. Cornell says she and her husband stay close by making sure to take 10 or 15 minutes every day to laugh together. They’ll watch bits of “The Colbert Report” on TV and laugh about politics, she says.

The Bringing Baby Home program suggests that couples spend at least 20 minutes a day talking with each other. It directs participants to ask their partners open-ended questions that go beyond talk of household and kid logistics.

The Relationship Research Institute has trained about 800 people to lead Bringing Baby Home programs since the course’s launch in 2005. The program is now offered to couples in at least 17 hospitals across the country.

One of the big parts of pre-delivery counseling is giving couples a clear idea of what they’re in for. “I make it clear that everybody struggles,” says Jean G. Fitzpatrick, a psychoanalyst in New York who began promoting “pre-baby and postpartum marriage sessions” on her website last year.

The pre-delivery programs have shown some success.

In a 2005 study in the Journal of Family Communication, the marital quality for women taking the Bringing Baby Home workshop was relatively stable from just before their child’s birth to the first birthday. Women in the control group who weren’t in the program faced a marked decline in marital quality during that time.

Another study published in 2006 in the Journal of Consulting and Clinical Psychology showed that expectant couples and new parents who participated in 24 weekly group counseling meetings experienced a much smaller decline in marital satisfaction over about five years compared with parents who didn’t have the counseling. The rate of divorce, however, was the same for both. The study followed 66 couples with children and 13 childless couples. (Those without kids didn’t see a decline in marriage satisfaction.)

Ms. Cornell reminds herself that this is all temporary. “I always look at the long-term,” she says. “‘Do I want this person as a companion in 15 years, because that is when I’m going to have him back? Are we going to be enjoying our kids’ graduations?'”